She later mastered her talent with chocolate at casinos like Caesars Palace and the Bellagio, where she exclusively focused on chocolate. She co-founded a wholesale chocolate company in Las Vegas before starting her own school in 2016.


“Knowledge doesn’t belong to you, it passes through you.”

World-renowned Chocolatier, Melissa Coppel, left her home in Cali, Colombia to study pastry in Argentina before moving to Chicago to attend The French Pastry School in 2006. One of the few women at the top of her field, Coppel worked at Joel Robuchon at the Mansion, a three-star Michelin restaurant and ran the pastry kitchen at L’Atelier de Joel Robuchon in Las Vegas.

Coppel’s passion stems from her childhood memories of watching her parents cook side by side in the kitchen and later testing out new recipes on her grandmother when she started to study in the culinary field. Her creations earned her several accolades including Chocolatier of the Year at the Pastry Live Competition in Atlanta in 2013 and was named one of the Top Ten Chocolatiers in North America by Dessert Professional in 2016.

Melissa has been a Cacao Barry Ambassador since 2015. Coppel teaches classes at her Chocolate and Pastry School throughout the year as well as around the world. Her school and her chocolate is an extension of this passion and desire to share it. “Knowledge doesn’t belong to you, it passes through you,” Coppel said.

The School was founded in 2016 by world-renown Chocolatier Melissa Coppel and offers intensive 2 to 8 day hands-on classes in a variety of topics: from all aspects of Chocolate making like bean to bar, enrobing, spraying, ganache formulation and panning, as well as pastry, ice cream and gelato, healthy baking, viennoiserie, platted desserts and sugar showpieces. The School’s commitment is to host only the best professionals in the world, to keep the class offerings evolving constantly, and to make students feel at home with a warm staff that welcomes everyone with excitement, homemade food and empowering energy,  because they believe that only in a relaxed atmosphere real learning happens.In 2021 the School will start offering longer programs for those who really want to dive in to the beautiful world of Chocolate.

“This profession has given me so much joy for me it’s really about giving back and growing together, which brings meaning to my life.”

Jeepers Creepers these transfer sheets are far out

Fancy a cuppa? 🍵 Tea time is always the bees k

Find Sir Quacksalot! 🦆 Did you know that the f

Stay up to date on the latest Chef Rubber products and promotions by signing up for promotional emails! 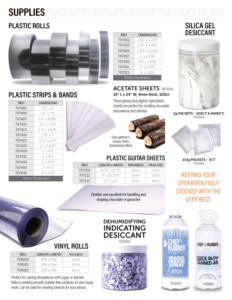 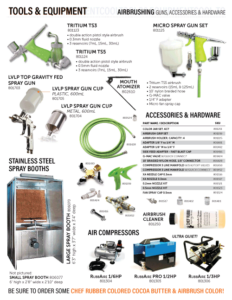