HOW TO MELT COLORED COCOA BUTTER

HOW DO YOU TEMPER?

With so many different ways of tempering and melting down colored cocoa butter, we are here to tell the simple Chef Rubber method!

When you receive your bottle of cocoa butter it is already in a tempered state. Our colors are Super Beta 6 tempered, meaning you don’t need to temper the color when you receive it. What you’ll have to do is melt it down in 10-15 second increments. At the end of each 10 second interval, remove from the microwave and shake the bottle. Place back in the microwave and continue this process at 10-15 second intervals, removing and shaking the bottle until some of the colored cocoa butter has melted. Repeat this action for about 1 minute and 30 seconds to melt desired amount. Cocoa butter temperature should not be taken higher than 86-90F. If this happens, you will have to re-temper the color.

Most Common Methods of Tempering:

Chef Rubber colored cocoa butter can be melted multiple times! This means you can keep re-using your color until it’s all gone! In order to keep your colors warm while you work, you can use a variety of tools such as: warming blankets, chocolate warmers, cocoa butter warmer, blow driers or heat guns (be careful with heat guns, they may be too hot and throw your cocoa butter out of temper).

Signs your Cocoa Butter is out of temper:

WHY KEEPING TEMPER IS INSTRUMENTAL

Did ya know when you receive Chef Rubber Color it is already in temper!?

When you temper Chocolate what you are actually tempering is the cocoa butter content it. This is the main difference between couverture and compound chocolates. No cocoa butter means it is compound, coating chocolate, best for dipping treats. Tempering is a time-temperature process to ensure the formation of chocolate in the right crystal habit. In practice this means we want 1-2% solids at ~32C which will act as seeds when the melt is cooled.

When tempering colored cocoa butter, you want to treat it the way you would your couverture. It is extremely important to keep BOTH chocolate and cocoa butter colors in temper, otherwise you will experience stuck chocolate pieces in your mould.

Are your chocolates popping out but some of the color gets stuck to the mould, or does not have a shiny look you hoped for? You may want to:

Other factors to consider when things are not working out:

*Quick Tip: It is not suggested to add “silk” or “mycryo” to your cocoa butter colors. Chef Rubber Cocoa Butter is already Super Beta 6, adding anything extra to the cocoa butter may cause unexpected results.

BE INSPIRED! WATCH OUR YOUTUBE VIDEO TO LEARN HOW TO MELT COCOA BUTTER COLORS! 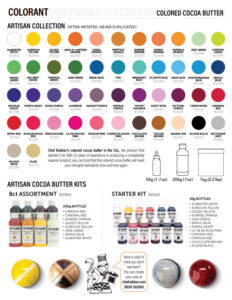